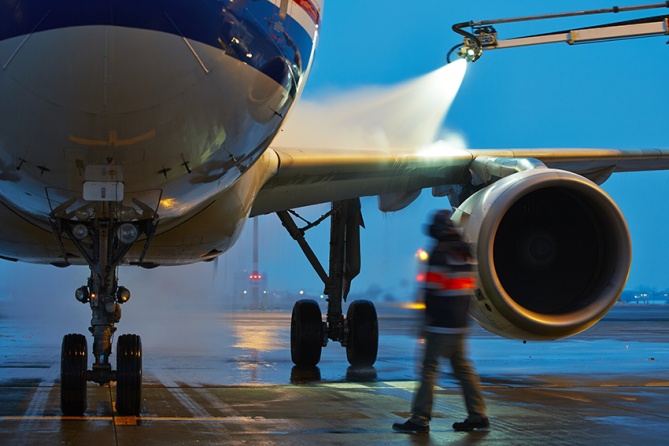 This blog explores how developments in forecasting capability, combined with an in-depth understanding of airport challenges and operations enables confident decision making in the lead up to, and during, high-impact weather events.

Over the last few years winters have been fairly mild, minus a few exceptions, the winter of 2010 being a clear example with all parts of the UK experiencing extensive snowfall and disruption to travel networks.

However, this seemingly mild trend with occasional cold periods adds a challenge to airport winter preparedness – how can airports plan effectively around this apparent chaotic behaviour of our weather and, what are we doing to try and help?

It is widely known that there is a degree of uncertainty in weather forecasts, and that the weather in the UK is particularly variable and localised (or has its own ‘micro-climate’).

In reference to uncertainties, whilst the UK has a relatively dense network of weather observations, we can’t measure everything everywhere, such as large areas of ocean.

As for micro-climates, the UK is a relatively small island located between continental Europe and the Atlantic Ocean, but has a vast range of topography and land uses. These all have a big influence on the local weather so how can we accurately reflect all of this in a weather forecast process?

Like other leading weather forecasting centres around the world, we tackle these problems by running weather models at ever finer resolutions and several times with slightly different starting conditions to understand the uncertainty in a weather situation.

To explain this, let’s look at what we mean by resolution. If you imagine the whole world covered in a square grid pattern, we effectively run mathematical equations at each of those grid points to ‘move’ the weather situation forward in time. Every time we increase the resolution by a factor of one, we increase the number of grid points by four meaning that there a many times more calculations to take place in the weather forecasting process.

Other developments include running our weather models several times; known as ‘ensemble’ forecasting. By running the model several times and slightly changing the starting conditions each time, we can better understand the range of weather scenarios that develop in the forecast evolution. Whilst there will always be uncertainty within a weather forecast – this approach enables us to quantify that level of uncertainty.

The two approaches of improving forecast capability by increasing resolution and running the forecast models several times both require a significant increase in computing power. To answer this challenge, in 2014 the Met Office announced a UK government investment of £97 million in a new supercomputer. At 13 times more powerful than its predecessor, the new Cray supercomputer is now operational and ranked as the top high performance computer in Europe, delivering more than 16 trillion calculations per second.

There is a risk that more powerful computers enable more detailed forecasts but effectively may just create more inaccuracies. To mitigate this, the additional computing power needs to be combined with more advanced atmospheric science to feed into the process. So, what have these combined activities provided? The Met Office Global Model now has an increased horizontal resolution of 17KM and we plan to upgrade to 10KM in the summer of 2017. In the UK, our operational model runs at 1.5KM and we are also running a research project to assess a 300M model over parts of the UK. This is a massive increase in the number of grid points and we’ve also increased the number vertical levels from 70 to 140.

Additionally, we are running an ensemble model to cover the whole globe at a resolution of 33KM plus a UK ensemble at 2.2KM resolution.

Integrating the forecast with decision making

So, what does all this mean in terms of improving weather forecasts and enabling winter preparedness at airports and throughout the aviation industry?

The higher resolution models allow us to more finely model the behaviour of the atmosphere to better understand and predict the risks of frost, ice, fog and snow at airports. This information can then be represented in the forecast information we provide.

Despite the above investments and developments, the atmosphere remains a chaotic system. For this reason, there will always be uncertainty associated with a weather forecast so importantly, how do we better integrate weather forecasting capability?

The way an airport operation can be impacted by weather of often a complex mix of non-weather factors such as size, capacity, demand, and staff availability. In the case of de-icing or snow, this extends to equipment availability. As these factors are different for each airport, it is likely that adverse weather planning is individual to each airport environment and operational set-up.

In order to ensure that the best (or most relevant) MET-information is provided to an airport, it is vital to understand such specific airport operational processes. This can often involve a conversation about realistic forecasting capability and what is viable for an airport to expect in terms of accuracy and timeliness of information.

In summary then, by combining a realistic MET-capability and an understanding of the airport operation, it is possible to jointly develop severe weather plans that are both relevant and achievable.